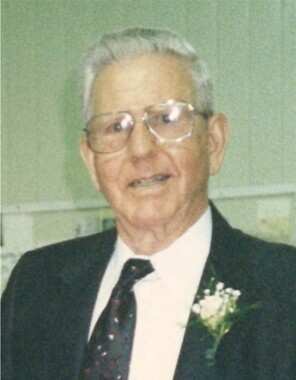 Back to Aubrey's story

Mr. Aubrey Gray, 93, of Tifton passed away on Thursday, August 1, 2019 at Tift Regional Medical Center.
Funeral services will be held on Monday, August 5, 2019 at 2:00 p.m. in the chapel of Albritton Funeral Directors with Rev. Keith Norris officiating. Interment will follow at Vickers Holiness Baptist Church Cemetery in Berrien County. The family will receive visitors on Monday, at the funeral home from 12:30 to 1:30 p.m. prior to the service.
Mr. Gray's nephews will serve as pallbearers.
Mr. Gray was born on August 24, 1925 in Berrien County to the late John Willis Gray and Lilly Gray Mathis. In addition to his parents, he was also preceded in death by his wife of sixty-eight years, , Lena Elna Holden Gray who died on July 31, 2014, two brothers and two sisters, and a son, Aubrey Darwin Gray.
Mr. Gray was a United States Army veteran in World War II and served in the Pacific Region, Philippines and New Guinea. He was proud to be a Christian and served as a deacon at both Park Street Baptist Church in Jacksonville, Florida and Fourth Street Baptist Church in Tifton where he was a member. Mr. Gray liked to fish, hunt and work in his yard and garden.
Mr. Gray is survived by many nieces and nephews.
Albritton Funeral Directors is in charge of the arrangements. You may sign the online guest register at www.albrittonfuneral.com.
Published on August 2, 2019
To plant a tree in memory of Aubrey Gray, please visit Tribute Store.

Plant a tree in memory
of Aubrey

A place to share condolences and memories.
The guestbook expires on October 31, 2019.