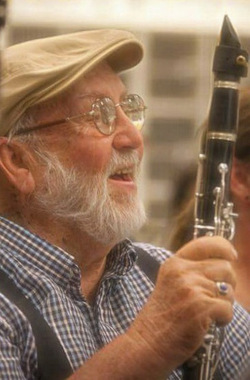 Back to Bobby's story

Mr. Bobby L. Godwin, 80 of Valdosta passed away Thursday, November 16, 2017 at the Langdale Hospice House after a short illness. Bobby was born December 30, 1936 to the late G.E.B. "Chic" Godwin (Ruby Lee) and Nadawah B. Towles (Otis) in Lenox and graduated from Tift County High School. He received a degree in music from Georgia Southern University and a Masters of Music from Vandercook College of Music. He was a member of Phi Mu Alpha Fraternity and lifetime member of Georgia Music Educators Association. Bobby retired from Lowndes County Schools after 30 years of teaching where he was one of the original band directors with the Georgia Bridgeman. He was a member of First United Methodist Church, Valdosta. He was active in the Chancel Choir and the Christian Homebuilders Sunday School class, where he was the chief joke teller and music leader. He was one of the founding members of The Milhous Quartet and a charter member of the Azalea Winds Classic Community Band. He performed with recording artists Percy Sledge, The Ink Spots, The Coasters and Little Red Blount. He was also the leader of his own groups, B. G. and the Dixie All Stars and Bobby Godwin and the Dixie Doodles. He and his wife spent time as motorcycle enthusiast and were members of the Old Spokes Motorcycle Club. He was also a member of the Cook County Historical Society. In retirement he was an active coffee drinker with the ABC Coffee Group. Daddy, Mr. Godwin, Grandpa, Grandbobby, as he was known by many names and was truly an inspiration to all his children and their spouses, grandchildren and great grands. He will definitely be missed. Survivors include his children, Michael Godwin (Christina) of Valdosta, Danny Godwin (Cindy) of Valdosta, Susie G. Schultz (Devin) of Kingsland, GA., and Joani Statham (Jammy) of Abbeville; grandchildren, Brittany Setser (Jared), Jessica Foster (Jake), Josh Godwin (Cellest), Avery, Nikki, and Noah Schultz, Allie Accursio (Austin), and Stone Statham; great grandchildren, Owen and Henry Setser, Elizabeth and Charlotte Foster, Emma Godwin, Kelli Anne and Austin Ramsey Accursio. Bobby was preceded in death by his wife, Virginia Godwin, and his parents. Funeral services will be held Monday, November 20, 2017 at 11:00 a.m. at Valdosta First United Methodist Church with Rev. Devin Schultz, and Rev. Dr. John McGowan officiating. A graveside service will follow in Stauton Cemetery in Lenox at 2:00 p.m. The family will be receiving friends Sunday afternoon from 3:00 - 5:00 p.m. at Purvis Funeral Home. Flowers are acceptable or donations may be made to the First United Methodist Church Music Fund, 220 North Patterson St., Valdosta, GA 31601. Condolences may be expressed to the family online at www.purvisfh.com. Purvis Funeral Home is in charge of arrangements.
Published on November 17, 2017
To plant a tree in memory of Bobby Godwin, please visit Tribute Store.

Plant a tree in memory
of Bobby

A place to share condolences and memories.
The guestbook expires on February 15, 2018.