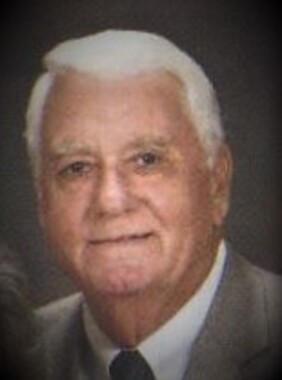 Back to Gene's story

Robert Eugene "Gene" Cannon, 86, of Tifton passed away Sunday, August 4, 2019, at Tift Regional Medical Center. His funeral service will be held at 12:00 p.m. Wednesday, August 7, 2019, at the Memorial Chapel of Tifton's First Baptist Church with the Rev. John Hughes officiating. Mr. Cannon will be laid to rest at Oak Ridge Cemetery. The family will receive friends Wednesday, August 7, 2019, at the Memorial Chapel of Tifton's First Baptist from 11:00 a.m. until the hour of the service.
Mr. Cannon's grandsons and Clair Troxell will serve as pallbearers. Honorary pallbearers will be members of the I. D. Morgan Sunday School Class at Tifton's First Baptist Church.
Born August 5, 1932 in Vidalia, Mr. Cannon was the son of the late J. D. Cannon and Annie Mae Giddens Hall. He was also preceded in death by one brother, Jack Cannon. He retired from Bell South and also served in the United States Air Force and he was a member of Tifton's First Baptist Church.
Mr. Cannon is survived by his wife, Marlene Jones Cannon of Tifton; three daughters and one son-in-law, Susan Cannon Dunlap of Tallahassee, Florida, Debra Cannon of Tifton and Regina Cannon Dunn and husband, Devin of Leesburg; one brother and sister-in-law, Julian and Janet Cannon of Tifton; two sisters, Joanne Sumner of Tifton and Carolyn Cannon Gay of Thrift; seven grandchildren, Ryan Dunlap, Grant Dunlap, Robby Rowe, Somer Parker, Shana Parker, Hank Dunn and Cannon Dunn; and three great-grandchildren, James Dunlap, Jay Canion and R. J. Rowe.
You may offer condolences to the family at the online guest registry at www.bowen-donaldson.com. Services for the Cannon family are under the care and direction of Bowen-Donaldson Home for Funerals.
Published on August 6, 2019
To plant a tree in memory of Gene Cannon, please visit Tribute Store.

Plant a tree in memory
of Gene

Restore the guestbook to view the 2 more posts by family and friends, and share a memory or message of condolence of your own.